I’ve been involved in migration research for nearly 25 years, in fact from the time when no-one was much interested in migration. Although I keep hearing that we need a ‘proper debate’ on migration, from my perspective I’ve spent a huge proportion of my adult life talking about very little else. You can read my stuff in lots of different places and most is available free online rather than in academic articles, which are often inaccessible (both practically and in other ways….). This blog is a way of me downloading thoughts and ideas about what’s going on in the world of migration which can’t be done in 140 characters on Twitter and which I don’t have time and/or inclination and/or expertise, to write about in a longer piece. Calling the blog ‘musings’ makes it sounds at least partly reflective but be prepared for the occasional unadulterated rant… View all posts by heavencrawley

IN THE ABSENCE OF TRUTH

receiving the truth – in the absence of collective truth,  words have no meaning…..

An exhibition of paintings and works on paper by

Ricky Romain and small works by Heather Fallows at

and to the additional events listed below;

Alison has for decades been informing and engaging with Parliamentarians, lawyers and the public about refugee and immigration law and policy.

An afternoon recital by Ricky Romain-sitar, and Steve Scott-tambura and bass guitar.

*All events are in The Long  Gallery

We really hope you can make it to one/ all of these events. It will be great to see you we will send further reminders nearer the times

“We all carry within us our places of exile,

our crimes and our ravages.

But our task is not to unleash them on the world,

it is to fight them in ourselves and in others.”

This is a time of exile from any redemption previously offered by the myths of heaven and the supposed forgivingness of God. Because of this, Camus said,“There is no sustainable criterion on which to base a judgement of value. One must act and live in terms of the future. All morality becomes provisional.”This provisional morality is a convenient way to change one’s view and actions from month to month. This in part is what creates life on earth as heavenly or hellish.

People suffer different forms of exile – from themselves as if a lost child fostered by emotional or mental fissures in their lives; from family, neighbours, work and society because of life’s pressures, or because economic / political factors disrupt everyday life, and at times because what they are capable of imagining may be contradictory to what their society considers acceptable. And of course because the most monstrous part of ourselves is capable of destroying our roots to our own land, forcing us into removing ourselves from our own identities.

EXILE is a project that will rely on metaphor and mood to transport the audience to a humane domain in which our shared humanity becomes paramount, where all the worst may be contemplated and all the best may be embraced.

Three artists are developing a collaboration in film, paint, poetry, photography, music and dance devoted to human rights, and to telling a story of exile, refugees and freedom.  It will be composed of the following:

-some of the painting’s squares;

-filmed interviews with local citizens and politicians about the state of the world;

-stills images of the local community living their lives

-and weaving through will be a newly choreographed modern dance performed for the film by a group of young people.

There are, at the moment, no boundaries to this collaboration. The three lead artists are committed to helping the audience grasp the human realities of exile, migration and the oppression, which challenge our understanding of our shared humanity.

Ricky Romain and Robert Golden are experienced artists and teachers in their fields of work. Cedoux Kadima is a developing artist with a refined lightness of touch as a writer, painter and film-maker.

The three artists have already met and worked together informally under the auspices of a European project where they discovered each other’s mutual interests and respect. It is clear to them that they will be able to enrich each other’s storytelling and at times merge their work together into a greater whole.

My painting ‘Lost Voices’ panel 9. 153cm x 132cm Oil and Indian Ink on gesso on canvas 2014. ‘Windows Kiss The Shadows Of The Passing Thirty Million’ published by Triarcy Press.
There will be a book signing at the Bookshop, 14 South St Bridport from 11am -1pm on Saturday 28th November 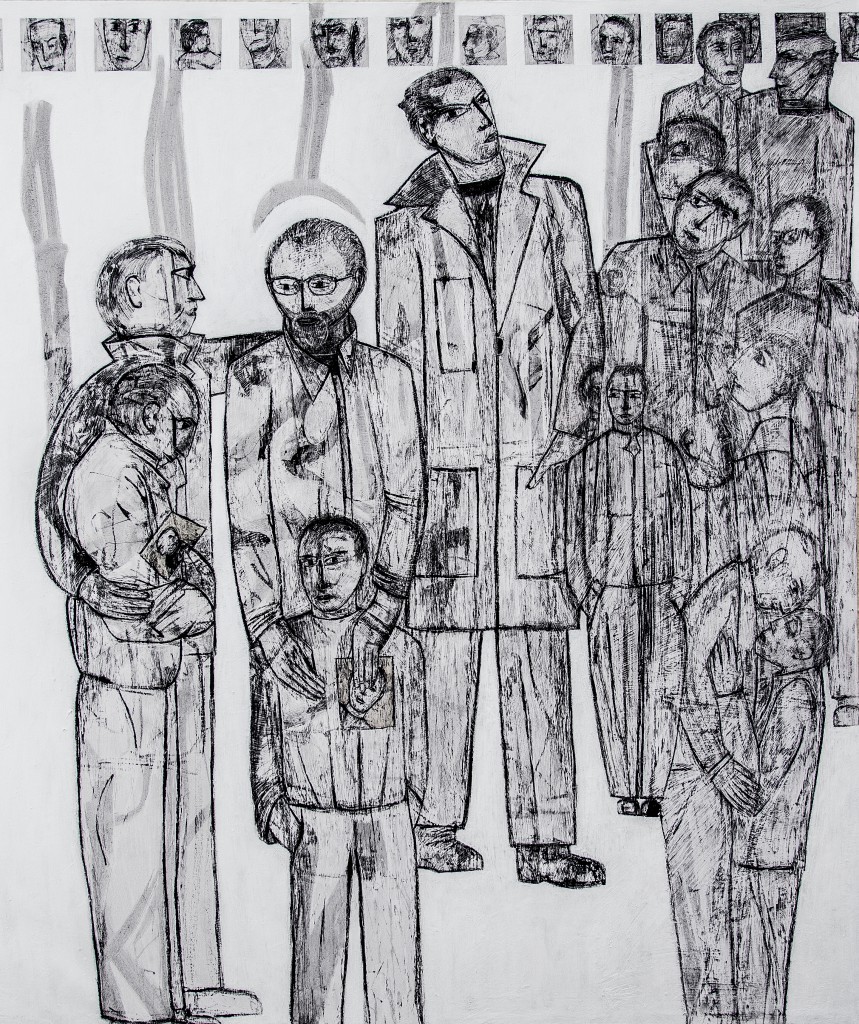 on September 15th between 6pm and 8pm.

of democracy and life.

With thanks to Bridport Banners for their help.

In  the early Spring David Powell worked with students at Sir John Colfox School looking at Democracy through music and song writing.

In May David ran a mock election to coincide with the national election and to help pupils become more aware of the meaning of Democracy.

In May Ricky Romain and Heather Fallows working with pupils through their exhibition, A Painter’s Way of Coping, looked at Human Righs

and Democracy through Art.

There will be refreshments.

Looking forward to seeing you there

This film is based upon the work created by Ricky Romain for his exhibition, ‘Marking Injustice’- A Painters Way of Coping which was hosted at Bridport Arts Centre from the 17th April -30th May 2015. This was a collaborative exhibition with artist and partner Heather Fallows and photographer and film maker Robert Golden. www.robertgoldenpictures.com

‘Art is such a profound way of changing society it can be done without violence. As you get older it becomes more important to offer something to society. I want to change hearts and minds’

To watch the film click on the blue tab below ‘Watch on Vimeo’. RR

In a time of uncertainty – how  can the arts play their part?

*REDRESS is a human rights organisation that helps torture survivors obtain justice and reparation, it also works with survivors to help restore their dignity and to make torturers accountable.

Tuesday 5 May, 7pm. Alongside the showing of a film about the artist by film maker Robert Golden www.robertgoldenpictures.com

Big news! I’m delighted to announce that I’ve been awarded my first ever grant from Arts Council England for an exhibition at Bridport Arts Centre opening in six weeks’ time, with new paintings by me concerning human rights, new work by Heather Fallows and a new film about me and my work by Robert Golden.

We’re all keen to get people to participate in many ways and show how painting is still an inspiring art form that can highlight important issues and bring people together to discuss and debate.

Tuesday 5 May, 7pm. Alongside the showing of a film about the artist by film maker Robert Golden www.robertgoldenpictures.com